We are currently studying Apologia's Astronomy and this week's chapter talked about Earth's atmosphere.  I've seen lots of ways to visually show this on Pinterest, but this is one useful way that I came up with after finding different colored granulated wax and clear jars at Hobby Lobby.
Granulated wax is perfect for kid crafts because it doesn't need to be melted before using.  You just pour it!
Each family (which for our class is two or three kids for the most part) got a glass jar and I explained that each color wax would represent the different layers of the atmosphere.  We had just gone over what all the layers are and information about them and all, so this project was to visually cement the idea in their minds.
They started by putting a glue dot on the end of the wick and gluing it to the bottom of their jar.  Makes it much easier to keep the wick straight while you are pouring layers of wax around it!
Then, they were allowed to take turns filling their jar with the different layers of wax and label which part of the atmosphere it was. 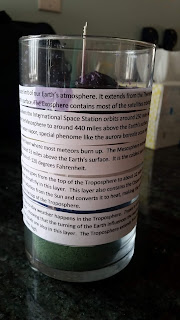 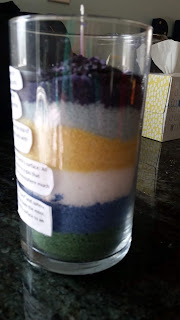 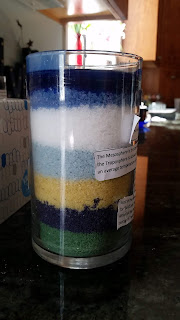 You can see in this picture that I did melt a little bit of the wax to pour over the top to seal it so the wax wouldn't spill for the car ride home with kids.
Pretty cool right?  Earth's Atmosphere Candles = fun and useful science project :)

When I was a kid and my mom was still having babies, there was a lady in our church that would make the most soft and beautiful blankets for every baby that was born.  She kept llamas and would spin and dye the wool herself.  Each blanket was a super treasured heirloom and whenever she came to a baby shower you knew exactly what gift she had brought.
Sadly, by the time I began having babies she no longer kept llamas or made blankets :(
My goal has always been to have some amazing gift that I can bring to baby showers like that. 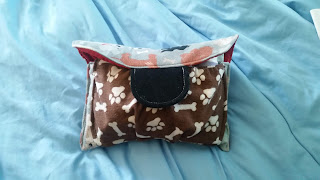 A Diaper Wallet to throw in a purse, stroller, or the car 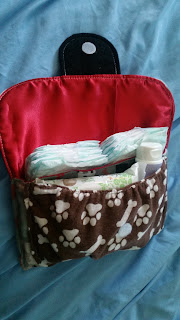 Holds about a day's worth of diapers, wipes, and butt cream 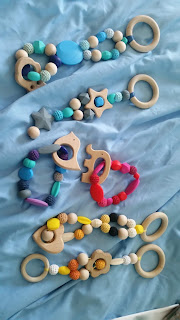 Wooden, silicone, and crochet bead teethers - all natural and very, very fun to play with!

Posted by Courtney@Booksnboys at 5:03 PM No comments: Links to this post

I used a pattern from Etsy to make this darling house for a family of bunnies!  The bunny pattern is from Creativity in Pieces and I made up several carrots and a little water dish as well for them.  I also made each bunny make noises (one rattles, one squeaks, and one jingles).
I had SO MUCH FUN decorating this little house!  I added craft foam between the pieces of felt to make it strong enough to stand up to lots of rough play and made one side of the roof open to easily get the bunnies in and out.  My niece turned two, so she was more thrilled about the bunnies, but I think she'll become more enamored with the house as she gets bigger.  Even if she never does, it was really fun to make :) 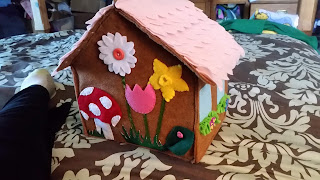 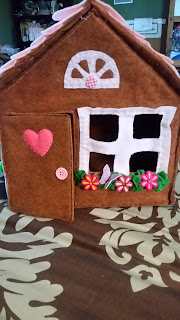 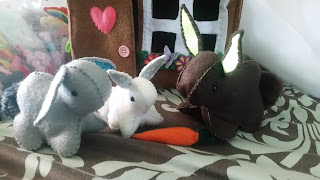 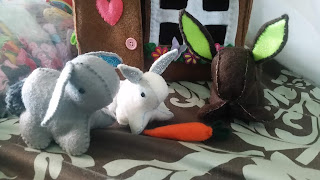 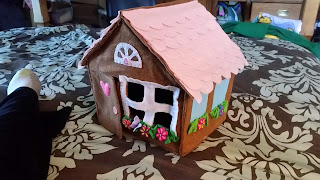 Posted by Courtney@Booksnboys at 5:22 PM No comments: Links to this post

We are studying Apologia's Astronomy textbook this semester and for our chapter about Earth I decided to do an Escape Room.  If you've never done one of these before they are super popular right now.  Basically the idea is that your team is "locked" in a room and must solve puzzles to escape.
We went to a fun Escape Room on vacation with my in-laws, but they are very expensive so I wrote one for my class to do.
There are three puzzles the kids had to solve and it took them about 30 minutes.  I was in the room, but I didn't help them at all.  They had to work together as a team.
I began by explaining that they were all junior scientists working for NASA and they had to stop a meteor from hitting the Earth by launching a rocket to explode the meteor.  However, their boss had the code and he was stuck in traffic!  They needed to solve the puzzles in the room to get the final code word to save the Earth! 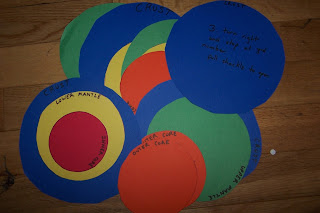 The first puzzle was a layers of the Earth puzzle that went along with chapter five of the Apologia book.  I wrote the code and instructions to unlock the box for the next puzzle on various layers and they had to put it together in order to get the order and numbers for the lock. 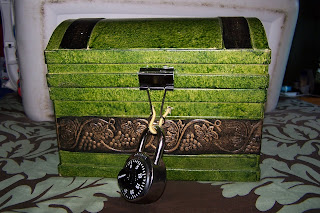 Here is a picture of the box.  Inside was all the components (except water) for the next puzzle (also from the book), a compass. 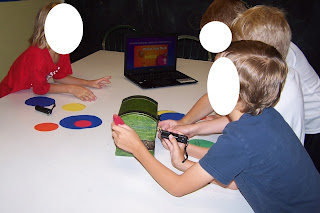 Figuring out the puzzle 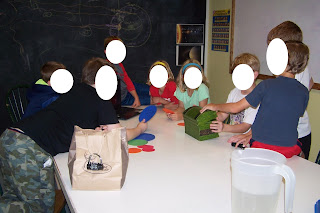 In this picture you can see them working on the first puzzle, the green lockbox with the compass pieces, the water, and the final word lock which is the brown bag. 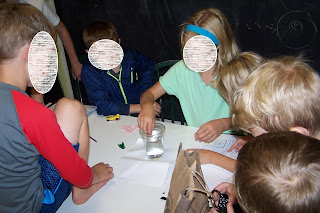 The instructions for the compass were in their notebooks which I gave them in the room.  The rule was they could use anything in the room, but they could not leave the room to get anything. 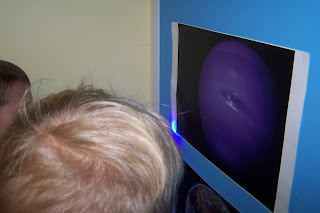 The compass instructions included the clue to check all four directions for their next puzzle.  I wrote on the various space posters with invisible ink pens and had blacklight flashlights for them to use.  This was a HUGE hit!  They were SO SO SO excited when they found these clues. 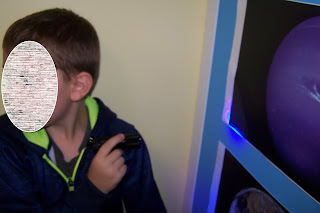 You can see the clue in the light above 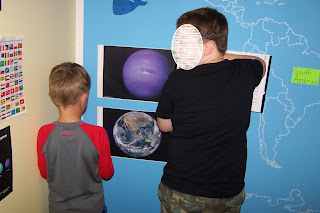 Each letter had a symbol by it... 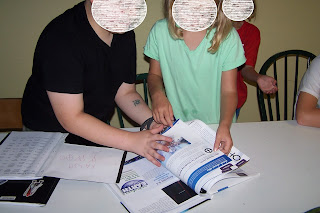 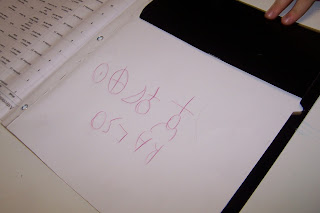 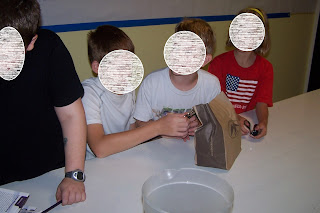 The final word to unlock the room was "solar" 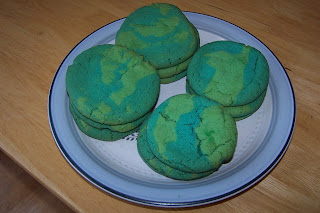 The prize for finishing?  Earth cookies of course!  The kids all LOVED the hands-on way of reviewing what we learned about with the Earth.  I am planning on writing another Escape Room when we study the weather...stay tuned ;)

Posted by Courtney@Booksnboys at 8:39 PM No comments: Links to this post

For Awana tonight we did Pastor Appreciation Night and I found the BEST craft on Pinterest!
Each team in Sparks had a bowl of buttons and a variety of wooden shapes from Hobby Lobby.
They used glue dots to cover the shapes with buttons - the more covered the better!
I had gotten the canvases on sale at Hobby Lobby and pre-painted the one for Jack (our head pastor) and written out the verses in black paint sharpie.  Then, once the kids went up to game time, I hot glued the shapes onto the canvases and check it out - AWESOME appreciation gifts for our head pastor, worship pastor, and youth pastor! 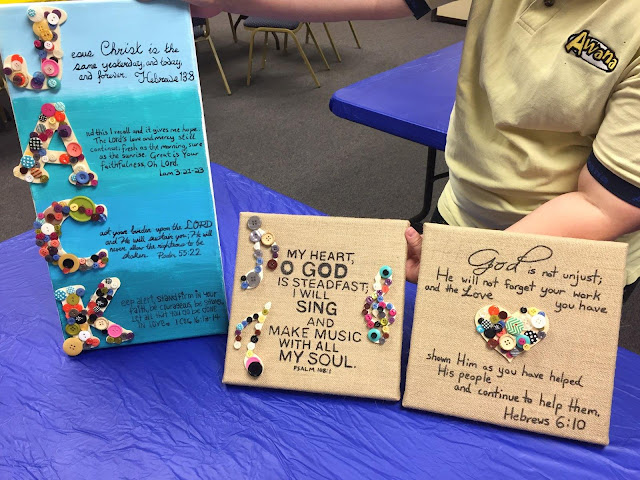 Posted by Courtney@Booksnboys at 4:49 PM No comments: Links to this post