My mom is a genius.  Seriously.  I'm not just saying that because she reads this blog either (Hi Mom :)

During this semester, she is teaching a history co-op class to my boys, my little brothers, and another family's kids.  One of the subjects she covered was the building of the First Transcontinental Railroad.  In addition to reading the kid's a couple books about it and I think watching a YouTube video or two, she came up with this great activity using wooden trains and track for the class to do to help them understand and remember how the building went.
So the kids were divided into two teams and each started at one end of the room.  The kid by the basket of train tracks was responsible for choosing and handing a piece of track to the kid with the train, who then had to drive it down the track to the kid at the end, who then got to lay the track.  Then the train had to go back to the beginning and do it again.  The idea was to help the kids understand that this was how the REAL train track was built (transporting the materials to the end and building as they went) 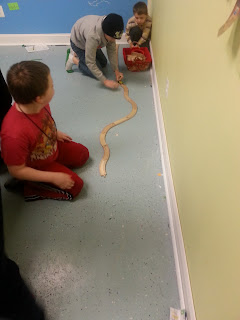 The thing that made it really exciting though, was that just like the real railroad build, there were TWO teams building at the same time at opposite ends of the country and they met in the middle.  So the other team of kids was doing the same process at the other end of the classroom (and as the teams had lots of boys, it got rather competitive) to see who could reach the middle first. 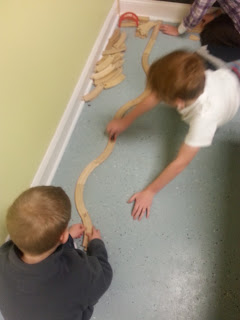 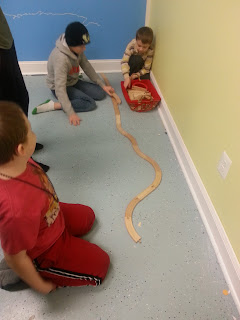 Then, the two trains met in the middle of the track and everyone came to see the dedication of the First Transcontinental Railroad! 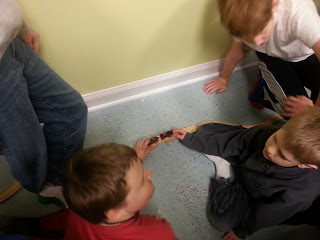 We were sort of trying to copy that famous picture of the two trains meeting and driving the golden spike moment.  Sorry it turned out kind of blurry.  Hopefully you get the idea :) 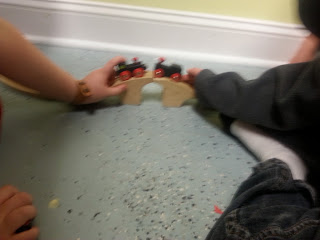 I had never seen anything similar to this activity done (even on Pinterest!) and thought it was a really ingenious way for the kids to have a hands-on way to review and remember this incredible event in our nation's history.

Posted by Courtney@Booksnboys at 1:50 PM