I was going through old pics this past week and ran across this picture of me when I was seven or eight: 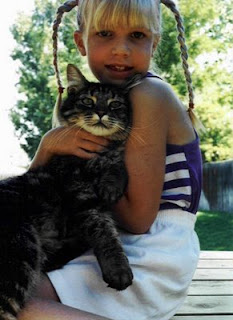 I am posing (of course) and holding my kitten (he was at max 3 months old at that time, yes he was a big cat!) that I got for Christmas when I was six. I LOVED that cat. He was the best. Since I got him for Christmas I was going to name him George Bailey, but my dad said I watched too much TV. So I settled on Crockett because he looked like the coonskin cap that Davy Crockett wore.
Crockett was smart. We put a bell on his collar because our PETA-fanatical neighbors came over to complain to mom that he killed a bird in their yard. Well, Crockett learned how to walk without ringing the bell! The only time he would jingle it was when he wanted my dad to let him outside - and dad would get out of bed (fast asleep) and let him out! Another thing Crockett could do was open doors. He would stand on his two back feet and use his two front feet to jiggle the knob until it opened. I got in trouble for leaving the door to the garage open a lot before we figured out it was the cat :p
The best thing about Crockett though was that he was GREAT with kids. My twin brothers were toddlers and my sister was a baby when we got him and Crockett would let my siblings do ANYTHING to him without biting/scratching/hurting them at all! They pulled his tail, sat on him, picked him up around the middle, etc. If he didn't like what they were doing, he would just get up and leave.
He even moved cross-country with us when we moved from Colorado to Virginia. He sat in the back of the car with me and moaned the whole trip. We drugged him, but it didn't put him to sleep - it just slowed down his meows :) We also had him declawed before moving cross-country. He learned how to catch birds/mice/whatever without claws.
He was a great cat. I hope that my kids will someday have a pet as wonderful as he was!
Want to join Sincerly Fro' Me to You? Head over to We are THAT Family.
Posted by Courtney@Booksnboys at 9:02 AM

Labels: fro' me to you